Size matters, but sometimes good things come in small packages and when the small packages are 250cc dirt bikes, it's really good. The brute force power of big bore 450s is nice to have, but the light weight, agility, and smooth handling of the current crop of 250cc bikes can also be advantageous. 2015 is shaping up to be an awesome year for the small bore bikes; Honda's CRF 250X returns after a one year absence, Husqvarna offers the FE 250, KTM has the 250 XCF-W, and Yamaha has not only updated the WR 250F, they've also introduced the YZ 250FX. Competition is a good thing.

Beginner dirt bike riders come in all shapes, sizes, personalities, and athletic abilities, and not all riders need to start out on an easygoing fun bike. The bikes listed here all have a bit of juice to them and will spit you off in a heartbeat if you're not paying attention, particularly the last three bikes. You'll need some confidence, athletic ability, aggresiveness, and above all, a healthy dose of respect for the bike's power to maim.

Just a head's up when it comes to comparing the bikes: the Honda and Yamaha use wet weight (aka curb weight), and the Husky and KTM use dry weight (i.e., no fuel, oil, etc), so the weight of the necessary fluids need to be added to the European bikes in order to make a better comparison. Suzuki and Kawasaki don't make 250cc trail bikes which is why they were left out. Two strokes are awesome woods bikes, but there just isn't enough room on one page so these are all four stroke bikes. In order to avoid repetition, all the bikes have electric start, headlight, taillight, and kickstand. 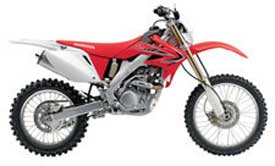 Honda CRF 250X: The 250X has been around for quite some time and although it may not be as race competitive as the other bikes right out of the crate, it's still a good bike. Of the five bikes in this list, the Honda is probably the easiest bike for a beginner to ride. It's got the lowest seat height by a small margin and is the least expensive bike by a few hundred dollars but . . . it's also the most outdated. The X still has a carburetor which is a bit surprising considered the CRF250R motocross bike already has Honda's Programmed Fuel Injection (PGM-FI). the 250X also has a five speed transmission while the others bikes have six speeds. It should be interesting to see what happens now that Yamaha has re-designed the WR and added a performance trail bike to the Yamaha lineup. Hopefully Honda will follow suit and update the 250X to make it even better and more competitive. Here are the 2015 Honda CRF 250X specs: 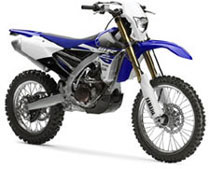 Yamaha WR 250F: Yamaha has brought not one, but two awesome trail bikes into their lineup for 2015. The re-designed WR250F (not to be confused with the WR250R which is a dual-sport bike) is slightly mellower than its brother the YZ250FX, which is more of a closed-course race bike. That's not to say the WR is a wimpy bike at all. It's just meant for a different type of rider and a wider variety of conditions. The WR is more beginner friendly than the FX and leaves plenty of room to grow into. Already garnering great reviews, the WR promises to be a welcome choice for trail riders. The specs for the WR are similar to the Honda with the exception of ground clearance, but the WR comes stock with a skid plate. Although the price is a few hundred dollars more than the X, the WR250F has well worth that much in updated features. The specs for the 2015 Yamaha WR 250F are: 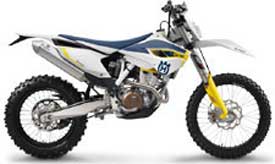 Husqvarna FE250: Husqvarna has a long history in the dirt bike world and their trail bike lineup keeps getting bigger and better with both two strokes (the TEs) as well as four strokes (the FEs). The FE250 weighs in at 237 pounds, which is the second lightest bike on the list, but it's not a lightweight in the power or handling department. The FE250 has a six-speed transmission, slightly taller seat height than the other bikes and the largest fuel tank. The FE250 is a good bike for advanced beginners that offers plenty of room to grow as your skills improve and their blue, yellow, and white graphics stand out from other brands. Their dealer network is not quite as widespread as the other manufacturers and the Husqvarnas are a bit more expensive than the Japanese bikes. Husky wants to increase their U.S. import numbers in 2015, and with the FE250 impressing the dirt bike media right from the start, grabbing more market share shouldn't be too difficult. The specs for the 2015 FE250 are listed below: 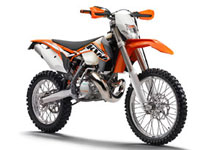 KTM 250 XCF-W: It's not going to be easy for Husqvarna and Yamaha to elbow KTM aside and grab a piece of the 2015 performance trail bike market. KTM has been in the game a long time and makes some awesome woods bikes. The 250XCF-W received a makeover in 2014 getting a new engine based on the SX-F motocross bike which was a big improvement, and the XCF-W is a potent woods weapon that's 'Ready to Race' right out of the crate. The XCF-W is similar in size to Husqvarna's FE250 with the same seat height, six-speed tranny, ground clearance, a slightly smaller fuel tank, and is a few pounds lighter. And, like the Husky, it's a bit more expensive than the Yamaha 250FX, which is its closest competition of the Japanese bikes on this list. The specs for the 2015 KTM 250 XCF-W are: 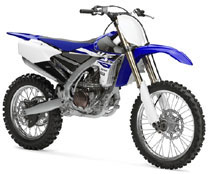 Yamaha YZ 250FX: Yamaha based the re-design of both the WR250F and the new YZ250FX on their longstanding and popular YZ250F motocross bike, and the YZ250FX can almost be considered an off-road trail version of the YZ250F. But unlike the YZ250F motocross bike, the FX has a six-speed tranny, electric start, kickstand, and 18" rear tire. The 250FX is more of a closed-course GNCC competition bike than an all-around trail bike and is a bit more aggressive than its brother, the WR250F so it's more of a novice level bike, although advanced beginners should be okay as long as you respect the bike in the beginning stages. The 250FX has a $700 price advantage over the Husqvarna and KTM which may sway potential buyers, but the MSRP is just a suggested starting point. Only time will tell how much of a threat the new FX will be to Husky and KTM, but it's definitely a plus for dirt bike trail riders. The Yamaha YZ 250FX specs are listed below: