There's a wide selection of entry-level motocross boots under $200 that offer the beginner dirt bike rider good protection at an affordable price, and some of the boots are closer to $100. You've probably spent more than that for a pair of running shoes.

If you're a beginning rider and plan to stick with the sport, you'll need to get a pair of motocross boots at some point. Motocross boots take some getting used to as far as shifting and braking, and the extra weight makes it harder to hold your leg up in a turn, so it's way better getting used to them right from the start.

This isn't meant as a 'best entry-level motocross boots' list, but the following brands have been around for many years. The boots were included based on the manufacturer's list price, not the Internet price which is almost always lower, and the only way to know the current price is to check the price just before you buy. All links go to Amazon unless otherwise noted as it would be impractical to include links to the many Internet e-tailers.

AXO is an Italian company established around 1978, and in 2003 they established AXO America so they've been in business quite a while. Their entry-level motocross boot is the AXO Drone (Amazon) which lists for $125 with the Internet price currently only slightly less, so even though the Drone has the lowest list price it may not be the cheapest MX boot. The Drone offers a durable synthetic outer material which helps resist wear, and a synthetic leather heat guard. There's a flex panel at the back of the boot for flexibility, but not a huge amount of heel padding. The sole is a Goodyear welt design with double stitching and a steel shank. The Drone offers a PU (polyurethane) four-buckle EZ-Lock closure, the buckles are replaceable, and the bottom buckle has good deflection protection. The Drone is available in black. 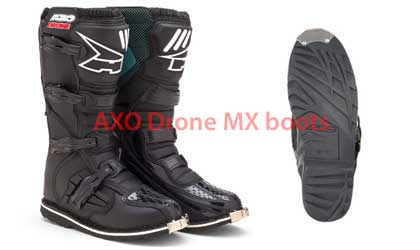 Fly Racing has been around a long time and we bought a pair of Fly 805 MX boots over fifteen years ago which lasted for quite a few years. Fly Racing's Maverik boots have been updated for 2019 and it's great to see Fly revising the Maverik while still keeping them affordable. The 2019 list price is $129 for black or white, and $139 for colors, and you can probably find the 2018 and older Maverik boots for around $100.

The Maverik offers pre-shaped molded plastic on the shin area and flex zones at the front of the boot as well as the achilles area. There's a good amount of padding around the ankle area and the articulated rear ankle offers flexibility without sacrificing support. There's a synthetic heat guard and the stitching is recessed around the molded plastic impact points. The Maverik uses a three-buckle closure with memory straps and adjustable quick-lock buckles. The bonded welt sole has a steel shank for support, but we honestly have no idea what Fly means by a 'fish tail' midsole. Most inexpensive entry-level MX boots only come in black or white, but the Maverik boots come in four colors (white, black, red, and hi-visibility). All in all, the Fly Maverik is a good, solid, entry-level motocross boot with a proven track record, all at a very affordable price.

The 2019 Maverik is available on Amazon or you can try the Fly Racing website. You can check to see if Amazon still has any of the 2018 Maverik boots leftover, but there might not be a wide selection of sizes. The boots are easy to tell apart because the 2019 Maverik has a different logo, a solid black heat shield, three buckles, and a bonded sole without a toe cap. The image below shows the 2019 Fly Maverik on the left and the 2018 Fly Maverik on the right: 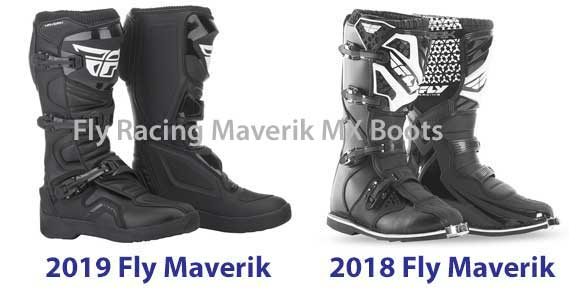 The O'Neal Element boots (Amazon) are a long-standing entry-level MX boot favorite, and received a redesign around 2015. The list price is $139, but the Internet price has been closer to $100 for quite some time. The redesign gave the boots new buckles and a wider calf area which is good for riders with big calves, or those wearing shin guards or knee braces. They also made the contact points more pronounced for improved contact with the bike and better protection for those high abrasion areas, and there's a synthetic leather heat shield for added protection. The lower part of the boot offers good impact protection and the injected molded plastic runs completely around the inside of the boot and wraps around the toe box. There are front and rear articulation panels for flexibility, and good padding in the ankle and heel areas both inside and out. There's an AirMesh interior for comfort and breathability. The Element boots have a durable Goodyear welt bonded sole with a metal shank, and the semi-aggresive design offers plenty of traction. The four-buckle closure straps are fully adjustable and replaceable, and the bottom buckle has good deflection protection. The Element is available in black, and white/black. The image below shows the Element in black along with the sole. 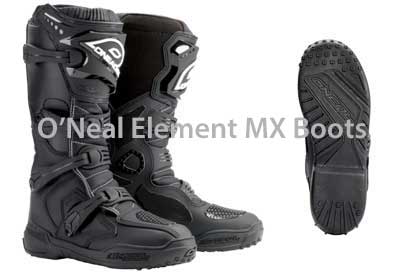 The O'Neal Element boots have quite a few reviews and answered questions on Amazon so the Amazon Q&A are worth reading. The O'Neal Element is another solid, time-tested entry-level motocross boot with great feedback that offers very good protection and has its own distinctive look. For just over $100, you really can't go wrong.

p.s. - O'Neal also offers a slightly cheaper entry-level Rider boot (Amazon) which is essentially the same boot, only with a more aggressive ATV sole. They're easy to tell apart because the Rider has a metal toe cap and the Element does not. If you primarily ride dirt bikes, go for the Element instead of the Rider.

The new 2019 Fox Comp boot (Amazon) is based on the popular Fox Instinct mid-level boot and has a list price of $189. The Comp's base is made of synthetic leather, and has a good amount of protection with a large TPU (thermoplastic polyurethane) shin plate, calf guard, and a TPU covering for the toe box. There's a synthetic heat guard all the way along the inside of the boot, and the boots have a reinforced TPR (thermoplastic rubber) heel cup and more TPU along the back of boot. The three-buckle Active-Lock closure system was first tested on the Fox 180 boots and consists of two silicone straps for the two top closure straps, and a regular buckle for the bottom closure strap. Instead of a regular buckle system, the two silicone straps get pulled over a small post. It looks easy to operate, and supposedly allows the shin plate to be more flexible. There's an internal lace-up system that allows you to snug the boot around your ankle for a custom fit. The Comp sole has a steel shank (to about the ball of your foot), and a rubber outsole that offers a good amount of grip and support. The Comp boots come in black, white, and stone, in sizes 8-14. The image below shows the 2019 Fox Comp Active-Lock silicone strap and post closure system in the stone color: 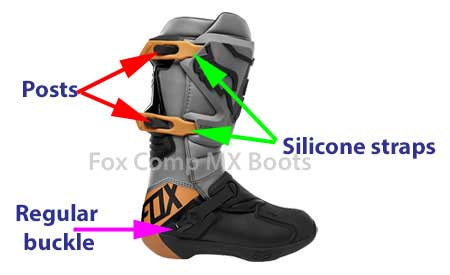 Alpinestar's entry-level motocross boot is the Tech 3, which has a list price of $199. We have several pairs of Alpinestars Tech boots (one pair of Tech 4s and two pairs of Tech 3s) and have been really happy with the boots. The photo below shows a pair of Tech 4s on the left and a pair of Tech 3s on the right. The Tech 3 boots have been around for a long time, were redesigned in 2016 and the redesigned boots now have three buckles instead of four. Our boots are the older model boots which is why they have four buckles. 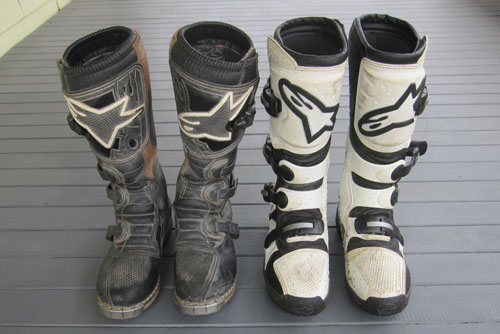 The (newer) Tech 3 motocross boots have an upper that's made from lightweight synthetic material for flexibility, durability, and abrasion resistance, and there's a flex panel in the rear for comfort and flexibility. The toe box is constructed of synthetic material for durability, and has a nice low profile making it easier to get under the shifter. There's a contoured TPU calf protector plate and good TPU medial protection. The ankle area is well protected both inside and out, and there's a replaceable EVA insole. The three-buckle closure system includes 3 polymer buckles with memory straps and a quick release/locking system with a self-aligning design for easy closure, and the buckles are replaceable. The high-grip rubber compound midsole is replaceable. The Tech 3 boots come in four colors and in sizes from 5 to 16, which is the largest size range of any other entry-level motocross boots.

The Alpinestars Tech boots we have were comfortable right out of the box and the sizing was perfect, so we're guessing the new design is the same. The Tech 3 boots have an average 4.5 rating at the various motorsports retailers, and you can check the latest price on Amazon.

The entry-level boots on this list should get you pointed in the right direction and give you an idea of what you can buy for less than $200.