The TCX brand of enduro and motocross boots might not be as well-known to American riders as other Italian MX boot manufacturers, but they've been making footwear since the 1980s and have a good selection of quality off-road boots.

In the 1980s, TCX was a private label manufacturer for several big-name brands including BMW and Ducati (back then they were known as Jolly Scarpe). By 1999 TCX (Jolly Scarpe) created their own line of products and launched a new brand called Oxtar. In 2007, the brand was renamed from Oxtar to TCX. (**The name 'Jolly Scarpe' sounded more like a pirate ship than an Italian footwear company, so out of curiosity we ran the name through Google's Italian-to-English translator and Google said it means 'Jolly Shoes' in English.) TCX's headquarters is in Montebelluna, Italy.

What does TCX stand for?

The TCX name came from one of their proprietary processes, the TCS (Torsion Control System). Since the TCS is used on their motocross boots (MX), the "S" was changed to an "X", and they rebranded the company name to TCX.

In 2017, TCX partnered with California-based distributor MTA (Motorcycle Tires and Accessories) in an effort to expand into the American motocross market. Two-stroke fans are probably familiar with the MTA name because they sponsor the World Two-Stroke Championship at Glen Helen Raceway.

At first glance it appears there are four enduro boot models in the TCX Adventure Touring lineup, but the Baja boots come in three styles so there are really only two models: The Baja and The Drifter. Here's a quick review of the TCX dual-sport boots:

This is the high-end model of the Baja. The upper on the Baja Gore-Tex is made of full grain oiled leather, and has a large front shin plate, a suede heat shield, and a padded upper collar area. There are front and rear padded flex areas for comfort and flexibility, heel and toe inserts for protection, and a double layer of stitched leather on the toe box for protection and durability. The ankle area has PU (polyurethane) inserts on both sides of the boot for better ankle protection. There are three adjustable camlock-style aluminum buckles. The dual durometer sole is made of a special rubber compound that offers good stability and traction without sacrificing the boot's walkability.

The big difference between this Baja boot and the other two Baja boots is the Gore-Tex lining. All three boots are waterproof, but the Gore-Tex lining is guaranteed for life, and allows for breathability in addition to being waterproof. The Gore-Tex lining comes to within about 4" of the top of the boots (about the bottom of the shin plate) and the rest of the boot's interior is lined with AirTech material. There's also a replaceable insole. The image below shows the Baja Gore-Tex boot and sole: 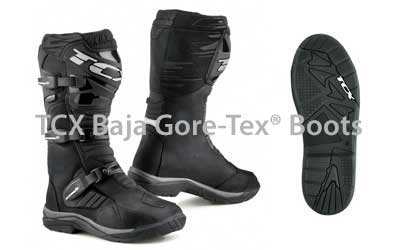 The Baja Gore-Tex is available in black, in sizes 5-13, and has a list price of $369. Info at the TCX website, or check Amazon's current price.

The Baja Waterproof is available in brown, in sizes 5-13, and has a list price of $279. Info at the TCX website, or check Amazon's current price.

The Baja Mid Waterproof is available in brown, in sizes 5-13 and has a list price of $239. Info at the TCX website, or check Amazon's current price.

The TCX Drifter boots are made of full-grain leather, with the front of the boot made of a microfiber material for flexibility, and there's another microfiber flex panel in back of boot. There's an injection molded shin plate and a suede heat shield. Like the Baja(s), the Drifter has two PU inserts on both sides of the ankle area, a reinforced heel cup, and the toe cap also has the same extra layer of stitched leather for protection and durability that's on the Baja. The three-buckle aluminum alloy buckles are replaceable and easy to operate. There's a bonded welt stitched-on sole with a more aggressive tread design than the Baja boots, and the sole is replaceable. The boots are waterproof up to about the bottom of the shin plate. The image below shows the TCX Drifter Adventure boots. 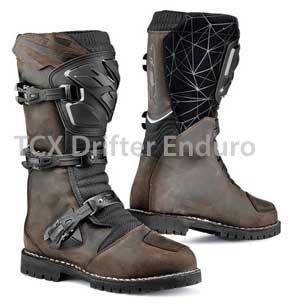 It's only been a little over a year since TCX started distribution in the U.S., so their enduro boots don't have a huge number of reviews yet, but the Drifter has more than the Baja, and seems to be a popular dual-sport boot.

The Drifter is available in vintage brown, in sizes 5-13 and has a list price of $299. Info at the TCX website, or check Amazon's current price.

TCX offers three models in their MX boots lineup: the Comp EVO 2, the X-Helium, and the X-Blast. Here's a quick review of the TCX motocross boots:

The TCX Comp EVO 2 is TCX's premium top of the line motocross boot that offers ultimate protection without sacrificing style or comfort. In addition to the armory of TPU protection you'd expect from a high-performance motocross boot, the Comp EVO 2 utilizes TCX's proprietary DFCS (Double Flex Control System) which can absorb a fair amount of shock, and prevents a certain degree of ankle hyperextension or hyperflexion. It's inevitable that you'll eventually catch your foot on the ground railing a rutted corner, or worse yet, get your foot totally jammed into the dirt, and the DFCS can help mitigate injuries from those sudden impacts and helps to prevent the impact force from travelling up to your knee.

The Comp EVO 2 offers plenty of padding around the ankle areas, shin plate, toe box and heel area. There are flex panels in the front and rear, and two vents on the lateral side of the boots. There's a two-position calf adjustment for those wearing (or not) shin guards or knee braces, and there are two Velcro closures - one in the normal spot up by the boot's cuff, and another slightly lower between the third and fourth buckle strap. The four-buckle aluminum closure system is replaceable, the buckles are slightly oversized to facilitate easy operation, and all the buckles have deflection protection, not just the bottom buckle. The replaceable Michelin bonded sole provides lots of rigidity and support so you can stand on the foot pegs moto after moto. The image below shows the Comp EVO 2 and the Michelin sole: 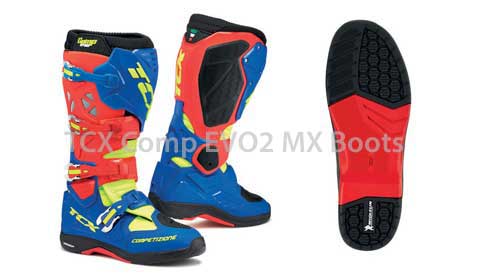 The Comp EVO 2 comes in seven colors, in sizes 5-14, and retails for $499. Info at the TCX website, or check Amazon's current price.

The TCX X-Helium is one of the lightest motocross boot in its class weighing in at just a tad over three pounds. The X-Helium is made with a leather upper overlaid with a TPU shin plate, TPU protection along the bottom of the boot on both the medial and lateral sides, and has a synthetic heat guard. There's no heel cup, but the ankle areas are well padded, there's a flex panel on the back of the boot as well as TPR protection in the calf area. The reinforced low profile toe box is protected by a layer of TPU for durability. The four-buckle aluminum closure system is easy to operate thanks to the slightly oversized buckles, the buckles are replaceable, and the bottom buckle has good deflection protection. As the name suggests, the X-Helium Michelin boot utilizes the same TCX/Michelin MX hybrid sole as the Comp EVO 2, and like the Comp EVO 2, the X-Helium sole has lots of rigidity which makes standing on the footpegs much more bearable. The interior of the boot is lined with the TCX AirTech breathable lining. The image below shows the X-Helium and the Michelin sole. The boots shown are the white color option even though it looks more black/white. 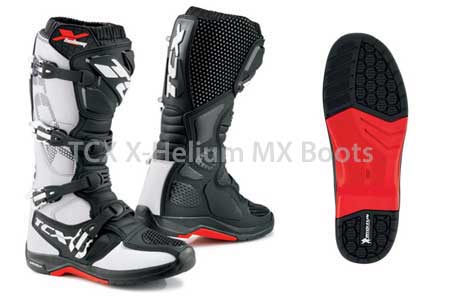 The X-Helium comes in three colors, (white, black and black/ yellow), in sizes 5-14, and has a list price of $269. Info at the TCX website, or check Amazon's current price.

The TCX X-Blast boots are TCX's entry-level motocross boots. The X-Blast offers a raised TPU shin plate with recessed stitching, a microfiber upper, and a microfiber heat shield. There's a PU (polyurethane) heel and ankle guard along with a PU toe guard. The four-buckle ergonomic buckles are adjustable and replaceable, but unlike the Comp EVO 2 and the X-Helium, the buckles on the X-Blast are made of PU, not aluminum alloy. The stitched sole is replaceable, but it's not a Michelin sole. The interior of the boot is lined with the TCX AirTech breathable lining. The image below shows the X-Blast boots and sole. 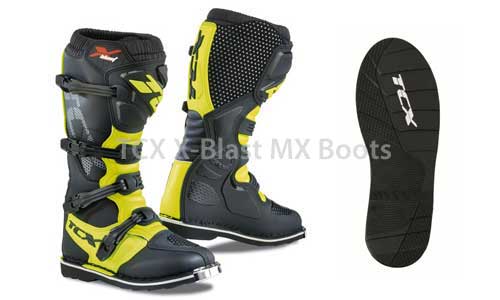 The X-Blast comes in four colors, (black, white, blue/yellow and black/yellow), in sizes 5-14, and has a list price of $199. Info at the TCX website, or check Amazon's current price.

If you're in the market for a pair of dual sport adventure boots or motocross boots, TCX boots should definitely be on your wish list. We have three pairs of Alpinestars Tech Series boots and as much as we like them, we'll be giving the TCX boots a long hard look when the time comes to retire the A'stars.