There's a great selection of adult four-stroke beginner dirt bikes on the market that can help you get started on your dirt bike adventure. The dirt bikes in this guide are quiet, dependable, and are designed for trail riding, not the motocross track. This beginner dirt bike guide takes a look at the 125cc and 140cc dirt bikes which are best suited for smaller adults.

** Note - to avoid confusion, the Honda CRF125F comes in two beginner dirt bike sizes: the CRF125F and the slightly larger CRF125FB Big-Wheel version. The Kawasaki KLX140 comes in three sizes: the 140, 140L, and 140G. The first two KLX140 models are covered here and you can find info on the full-size KLX140G in our Kawasaki KLX140G article. The larger beginner dirt bikes are covered in the Yamaha TT-R230 vs. Honda CRF250F article.

This first comparison looks at the Honda CRF125F and the Kawasaki 140. Both have electric start (the Honda also has a keyed ignition), a 17" front tire and 14" rear tire, an MSRP of $3099, and both have a six-month warranty with extended warranties available at an additional cost.

One of the big improvements to the 2019 Honda CRF125F beginner bike is fuel injection. Even the full-size Honda CRF230F and CRF250X don't have FI yet, and the CRF125Fs are the only beginner dirt bikes on this list that have fuel injection instead of a carburetor. The CRF125F has a four-speed transmission, front disc brakes, rear drum brakes, 29.1" seat height, 8.3" of ground clearance, and weighs 194 pounds. The KLX140 has a five-speed transmission, front and rear disc brakes, a Keihin carburetor, 30.7" seat height, 9.3" of ground clearance and weighs 205 pounds.

Summary: The fuel injection of the Honda is great, but the 29.1" seat height is too low for most adults as is the 8.3" of ground clearance. The 125F has a four-speed tranny (compared to the five-speed of the KLX140), but with a bike this small one less gear won't be as important as it would be with a larger bike. The front brakes are disc brakes but the rear brakes are drum brakes - the KLX has disc brakes front and rear. The fuel tank on the CRF125F is smaller than the KLX140, but the fuel injection compensates for that with improved fuel efficiency. Parents who are worried their kids might take the bike out for an unauthorized spin will probably appreciated the keyed ignition that the Honda offers.

The KLX140 has a carburetor instead of fuel injection, but Keihin carbs are dependable, quality products. The KLX140 has a five-speed tranny and comes with front and rear disc brakes. The 30.7" seat height is over 1.5" taller than the Honda and is better suited to most adults, and the KLX140 has an extra inch of ground clearance. The one noticeable difference is the weight. The KLX140 is eleven pounds heavier than the CRF125F, but a large part of that stems from the larger engine size - 140cc's for the KLX compared to 125cc's for the CRF, so the extra weight of the KLX is offset by giving you more power. The Honda 125F is a good beginner bike for some adult riders, but the larger size, increased ground clearance, and extra power of the KLX140 along with the rear disc brakes and five-speed tranny all at the same price point makes the KLX140 well worth a look. The images below show the 2019 Honda CRF125F and the 2019 Kawasaki KLX140 along with the bike's specifications: 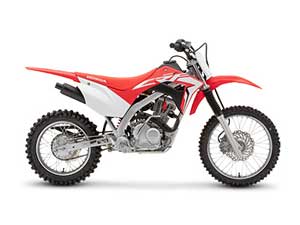 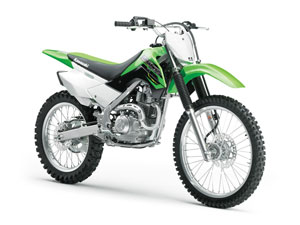 This beginner dirt bike class is somewhat crowded so to avoid repetition, all four of the following beginner bikes have a 19" front wheel and a 16" rear wheel, and all have electric start except the Suzuki DR-Z125L which has a kickstarter. The first three bikes have a six-month warranty with options to extend the warranty at an additional cost, and the Yamaha TT-R125LE has a 90-day warranty. They're all great bikes and are listed in alphabetical order.

Honda's CRF125FB (the 'B' stands for Big-Wheel) is the big brother to the CRF125F mentioned above and like its little brother, also has fuel injection for 2019 along with a four-speed transmission, and an electric start with keyed ignition. The 125FB has front disc brakes, rear drum brakes, a 30.9" seat height, 10.3" of ground clearance, weighs 199 pounds, and an MSRP of $3499.

Suzuki's DR-Z125L has a five speed tranny, front disc brakes, rear drum brakes, Mikuni carb, 32.0" seat height, 10.2" of ground clearance, weighs 196 pounds, has a plastic skid plate, and an MSRP of $3299. The DR-Z125L is the only beginner dirt bike that has a kickstarter instead of electric start.

Summary: The ground clearances of the four bikes are all within .5" (10" - 10.4") so that spec can be eliminated from the comparison. Once again, the fuel injection of the Honda CRF125FB is a great improvement, but it's the only bike in this class with a four-speed tranny and unlike the smaller Honda125F, having one less gear starts to matter once the bikes (and presumably the riders) increase in size and ability. The Honda has the lowest seat height at 30.9" which might appeal to shorter riders. The Kawasaki KLX140L has a five-speed tranny and like the smaller KLX140, has disc brakes both front and rear, not just in the front. It's the heaviest bike by 10-14 pounds, but it has a larger engine so the trade-off is more power. The seat height is only slightly lower than the Suzuki DR-Z and Yamaha TT-R.

The Suzuki DR-Z and Yamaha TT-R are almost identical in size and power specs. They both have carburetors, front disc brakes and rear drum brakes. They even have the same MSRP. The Suzuki has the tallest seat height of the four bikes (32.0"), and is the lightest, but only by a few pounds. One reason for the lighter weight is because the DR-Z uses a kickstarter so it doesn't have the extra weight of the small starter motor needed for the electric start. The Yamaha TT-R has the most ground clearance by a small margin, and has an easy access air filter which is a plus because changing the air filter is an important part of bike maintenance, but the TT-R only offers a 90-day warranty compared to the six-month warranty of the other three bikes.

The long-running and very popular Honda CRF150F did not get a redesign for 2019, so 2017 is the last year the 150F was available. For whatever reason, Honda decided to discontinue the 2019 CRF150F instead of redesigning it which is why it's not included in this guide. That's a shame because it was a really great beginner dirt bike.

For more info and detailed specs, visit the manufacturer's websites:

The bottom line is that these are all great beginner dirt bikes for smaller adult riders. Read through the specs and decide what's important to you, then head out to the dealer. You won't go wrong with any of these bikes.