The 2020 KLX300R is being marketed as a bike that bridges the gap between a weekend play bike and a full-on race bike and that's a good description. It's always helpful to compare one bike to another, but only if you can compare apples to apples. Like the KLX140G, the KLX300R doesn't have any direct competitor. The closest competitor in the beginner class would be the Honda CRF250F, and in the competition class, Honda's CRF250RX or Yamaha's WR250F would be the next step up, but it's a big step up. A few similarities (and differences) between the bikes will be noted, but this isn't a full-on KLX300R vs. CRF250F vs. WR250F article.

The KLX300R is the largest adult-size beginner dirt bike and has some features that the other beginner bikes don't have. The KLX300R has the largest engine (292cc) in the beginner bike class and is the only bike that has a DOHC engine. The 300R is also the only beginner bike that's liquid-cooled instead of air-cooled. There's nothing wrong with an air-cooled bike, but higher-end performance bikes are all liquid-cooled. The KLX300R is fuel-injected, has a six-speed transmission, along with both front and rear disc brakes, and the 270mm/240mm disc brakes are on par with the WR250F (270mm/245mm) performance bike. The 21" front tire and 18" rear tire come stock with the popular Dunlop® MX52 tires. There's an electric start, but no backup kickstarter. 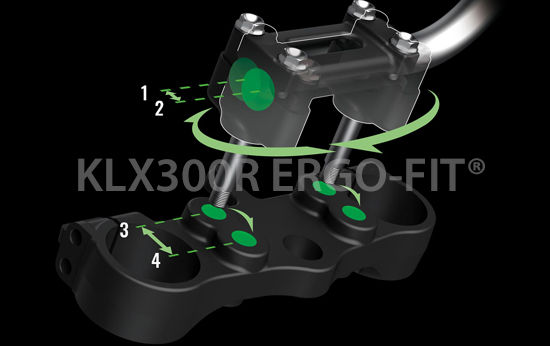 The 12.0" ground clearance coupled with the generous 11.2" of rear travel allows the 300R to handle more aggressive riding on a variety of terrains. The rear travel on the CRF250F is 9" and the WR250F rear travel is 12.5", so the 300R once again falls (roughly) midway between the two bikes.

The KLX300R weighs 282 pounds so it's the heaviest beginner bike, but that's understandable given the larger engine size and larger gas tank (bike weight is calculated 'ready-to-ride', with all fluids added). The KLX300R is 17 pounds heavier than the Honda, and 28 pounds heavier than the Yamaha. Keeping in mind of course that the WR250F is more of a performance bike so it uses a different, lighter (and more expensive) frame.

Here are some of the specs for the three bikes:

The brand new 2020 Honda CRF250F is a great full-size beginner bike that has already established itself as a solid performer after only a year on the market, and it's the most affordable choice of the new breed of adult beginner dirt bikes.

The KLX300R raises the bar for other beginner dirt bikes by offering a larger DOHC liquid-cooled engine, larger fuel tank, and plenty of rear wheel travel, but it also raise the price tag by $900 compared to the Honda CRF250F. The KLX300R doesn't have the bells and whistles of the WR250F such as a headlight and instrument panel, but the 300R doesn't have an $8599 price tag either.

Kawasaki hit the nail square on the head with the smaller KLX140G a few years ago, and it looks like they're going to do the same with the KLX300R. It's great that consumers have more beginner dirt bike choices, and the KLX300R is a good choice for beginning riders who have enough confidence in their riding abilities to handle a bike with more power, or someone who has outgrown a smaller bikes and is ready to step up, without breaking the bank. You can find more info about the KLX300R at the Kawasaki website.

The first video is a first look walkaround of the 2020 KLX300R. The second video shows some of the mods already available for the Honda CRF250F.